The truths within old stories

The scientific method uses a simple sort of logic. You look at something happening and you wonder what is going on. So you watch a while longer and think you see a pattern. You walk away and sit down with a cup of tea and think about what you have seen and suddenly it hits you. But to be sure you are correct you need to be able to predict what is going to happen so you take another sip of tea and figure out, “Yes, from what I have seen this will happen again next Tuesday.” You duly return to the same place on Tuesday to watch what will happen. One of three things could happen. What you predict happens on time. So you think your theory is looking good but you need to watch some more to be on the safe side. What you predict does not happen at all. This means back to the drawing board with the theory. What you predict happens but 10 minutes later than you calculated. You think, “Yeah, I am close but I need to watch for a bit longer to refine the theory.” At the end of June, the Whanganui Science Forum hosted a talk by Dr Dan Hikuroa, which I felt was a personal epiphany. I have been working with the scientific method in one form or another since the age of 7 (it may have been earlier), but this talk cast this method into a whole new light. There was one pu¯ ra¯ kau or myth that he related which really hit me. I hope he does not mind if I tell it here. The settlement of Matata¯ is located along the banks of a stream that rises in higher ground further inland. The local authority wanted to build houses on the flat area that the stream cut through. Associated with this stream is a pu¯ ra¯ kau telling of a taniwha in the form of a lizard. The head is where the stream rises, the body of the lizard is the stream as it works its way down through the hills and the tail is where the stream crosses the flat area on its way to the sea. The warning in the legend is: “Beware of the flicking tail of the taniwha!” The council surveyed and measured and laid out a plan for building the houses. The local people said, “Do not build there. Beware the flicking tail of the lizard!” They were ignored. The people had built their own wharenui on a place the legend told them the tail of the lizard cannot reach. In 2005 there was a great downpour and the stream of the taniwha was over full. The water pouring out of the narrow gap in the hills was like a water hose that thrashes about if you do not hold it tightly. The tail of the lizard flicked viciously left and right and destroyed many houses. The wharenui was untouched. This was not some kind of magic. It was scientific observations over generations that had been condensed into a story. This is ma¯ tauranga. How many ideas from school science do you remember because the teacher told you a story around them? Modern science has not served the world well in many places. If the learning and observations of many generations have been condensed into myths and legends we need to be listening to those stories. 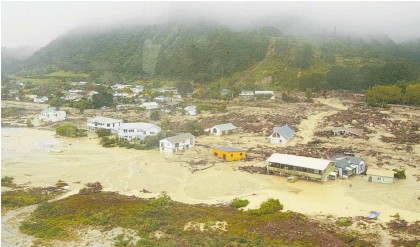