Amdram Theatre’s production of The Phantom of the Opera opens in less than two months and, in preparation for this, the theatre in Guyton St is a hive of activity. Director Graham Dack has assembled an exceptionally talented cast and crew, who have been working tirelessly since February, putting together a show that will do justice to the famous musical. In the pivotal lead roles are three gifted performers who are working hard at bringing the iconic characters to life. Iain Tetley plays the mysterious Phantom. Iain became involved in musical theatre at a young age, playing the title role in Oliver at primary school. His resume includes Shakespeare, The Mikado and a leading role in Fiddler on the Roof, performed in England in 1996. Iain was a teenager when the Phantom of the Opera was launched, and it has played a significant part in his musical upbringing. So, when Amdram Theatre launched its Phantom campaign in November 2019, Iain signed up. He is relishing the opportunity to play a character of such magnitude and considers it a huge privilege. And, of course, it is the music that stands out for Iain. “A masterpiece of musical drama” is how he describes it. Iain is sponsored by Air Chathams, whose support has been invaluable. Recently, one of New Zealand’s most respected thespians, Jennifer WardLeland was flown to Whanganui, courtesy of Air Chathams, to hold a workshop about intimacy on stage, which many of the cast attended. Jamie Henare plays the role of Raoul de Chagny who, along with the Phantom, vies for the affections of the beautiful Christine. Jamie came to theatre through his love of opera. At university he auditioned for classical guitar and classical voice and found that singing was where he was most comfortable. This led to performances in various shows, which appealed to him as well. Jamie says if ever the opportunity arose to be part of a production of Sweeney Todd, Les Miserables or the Phantom of the Opera, he would put his name forward as these three musicals appeal to his more operatic interests. The music rehearsals have been most enjoyable for Jamie, especially those with orchestral and ensemble accompaniment as this is when he gets a glimpse of the finished product. Jamie is sponsored by Heather Bellamy and Eddie Bleackley. Maika Montgomery plays the object of the Phantom’s obsession, Christine Daae. Maika was first introduced to the Phantom as a 10-year-old, attending a performance of the show with her family at the Civic Theatre in Auckland. When she saw a notice in our local newspaper advertising the show, she expressed her interest in being involved in any capacity, never expecting to be offered the lead role. However, she is absolutely thrilled to have won the role of Christine and is determined to do all she can to bring the character to life. Maika says Christine is one of many characters in the Phantom who display traits that everyone can relate to: passion, pain, insecurity, desire and love to name a few. Maika has loved every minute of rehearsals so far, diving deep into understanding exactly who her character is and challenging herself as a performer. This task has been made easier by the fact that Amdram is “such a supportive and caring environment”, and the cast is “an amazing group of people”. Maika is sponsored by Terry Lobb Colour and Design Ltd. Terry is vicepresident of Amdram Theatre and has been involved in numerous productions over the years, using her artistic talents in numerous ways. She loves all aspects of theatre, and Amdram has benefited greatly from her expertise. The show opens on September 17, with the final of the eight performances on September 25. Tickets are available from the Royal Whanganui Opera House website and the box office. 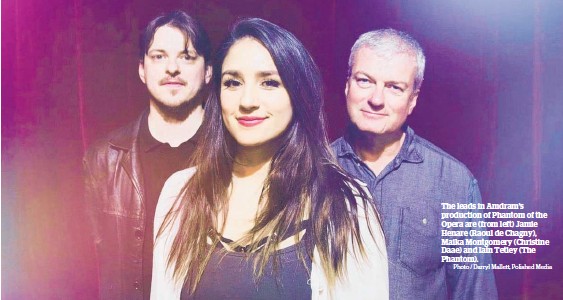