Thousands of farmers and a fair number of their dogs descended on towns and cities across New Zealand to protest at increasing interference by the Government in their way of life. From Kaitaia to Invercargill, convoys of tractors, farm vehicles, trucks and utes took part in the Howl of Protest event, organised by Groundswell New Zealand, against what they say are unworkable regulations and unjustified costs. The protest was organised against policies like the Clean Car Discount, which will subsidise clean vehicles by charging fees on high-emissions vehicles. Protesters were also anxious about the eventual pricing of agricultural emissions, which will happen by 2025 — a decade after agriculture was first slated to enter the Emissions Trading Scheme. Auckland motorists travelling on the Southern Motorway faced delays as farmers from Franklin headed to the central city and made their way down Queen St. “For once I don’t mind sitting in Auckland traffic, go the farmers! Time someone held this Government to account for their ill conceived policies,” one city worker said. At Kerikeri in Northland, Pipiwai dairy farmer Daryl Barge said he was fed up with being told what to do in a setting where farmers are silenced. “There is a long list of things that the Government has done to rural New Zealand. We’ve had enough.” Barge said the Government had made rural New Zealanders’ livelihood “very, very difficult“. “The mental stress of being told constantly that you’re polluters, that you are bad for the country…i really feel for the younger generation of farmers. It’s pretty tough.” Deputy Prime Minister Grant Robertson said he understood the “pressure“rural communities felt under the weight of Government policy reforms. “There are a lot of things happening at the moment in the economy to try and make sure New Zealand’s economy remains both fiscally and environmentally sustainable. We’ve been working very closely with rural communities on this,” Robertson said. “I understand that at the farm level Left, farmers protest Katikati. they are feeling the pressure of that change,” he said. Robertson urged farmers to work with the Government. “What I’d say is we have to work together on that, just as we worked together to resolve issues around Mycoplasma Bovis, just as we worked together to support those who lived in rural communities through Covid, just as we worked together to ensure air freight gets out and exports get out,” Robertson said. He echoed comments made by Prime Minister Jacinda Ardern earlier this week that action on climate change was important for New Zealand’s trading relationships. The protest whipped up a political storm in Parliament and nearly every National MP was deployed to a protest site around the country. The party launched a new ad against the Clean Car Discount to coincide with the protest. Calling the discount policy a ‘ute tax’, National leader Judith Collins said it “unfairly penalised farmers, tradies and others who rely upon vehicles for which there is no electric alternative”. Signs in and around the 55 centres included ‘No Farmers No Food’, ‘We are at Regulation Saturation’, ‘Black Utes Matter’, ‘Stop Demonising the Best Farmers in the World’. One farm dog sported a placard on his collar “I can’t work on a Prius!” Torrential rain did not stop hundreds of tractors, trucks and utes snaking through Greymouth on the West Coast, while the number of farm vehicles heading to Christchurch saw some protesters diverted to other Canterbury towns. Hawke’s Bay Groundswell coordinator Chris Miles said he estimated the crowd was 800 vehicles and a couple of thousand people strong. Miles described the crowds as “unprecedented” and possibly the biggest nationwide protest NZ had seen, including the Springbok tour. In Tauranga , Ingrid Raath said she was taking part in the Katikati demonstration because what affected farmers also affected the wider community and it was important to listen to their concerns. — NZ Herald 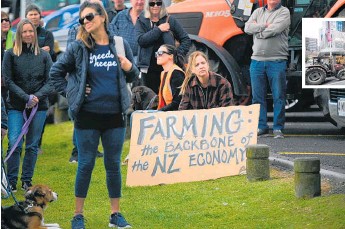