All Blacks show what they took from first Fiji test

Satisfaction will be much more prevalent after the All Blacks signed off their July series with a clinical win over Fiji that solidified several of Ian Foster’s firstchoice selections. Widely criticised for their muddled effort and lack of urgency at the breakdown in the 34-point victory against Fiji in Dunedin a week earlier, the All Blacks delivered a vastly-improved performance in the repeat duel with the Pacific Islanders in Hamilton on Saturday. The 20,135 locals — the biggest crowd of the three tests this month — who braved wet and blustery conditions were treated to nine tries from the All Blacks. While that was the same number as last week, the All Blacks were more dominant in most aspects. Richie Mo’unga seized his chance to impress Foster and maintain his edge over Beauden Barrett in the first five-eighth pecking order with an influential display. Mo’unga had a hand in four tries — three involving in-form Crusaders team-mate Sevu Reece — to firmly stake his claims before being replaced after 52 minutes. Collectively, the All Blacks forwards brought a much more direct approach to their carrying which put the team on the front foot and allowed the backline to breathe easier. Sam Whitelock’s authority in regaining the captaincy was evident, too, in the way he gathered his troops in a huddle during the first half and barked orders to reflect the influence he commands. Akira Ioane, Luke Jacobson and Ardie Savea varied their work and combined well in the loose trio — Savea barging over to collect a try and celebrate his 50th test. Anton LienertBrown was quieter in his 50th test after returning from elbow surgery, but will no doubt be better for the run alongside David Havili. Chiefs hooker Samisoni Taukei’aho — called up late in the week to replace Dane Coles — made a notable impression off the bench, claiming two tries on test debut and carrying powerfully as he has done all season. Rieko Ioane, likewise, injected significant impact from the bench when he replaced Will Jordan on the right wing early in the second half. The All Blacks will be pleased their scrum and rolling maul continue to lay dominant platforms and with the greater urgency they brought to their defensive duties — highlighted by Damian McKenzie and Barrett scrambling back to make a try-saving tackle after Ben Volavola snaffled an intercept. Fiji managed to score one try — loosehead prop Peni Ravai strolling in easily off the back of a maul — but they were never in this contest. Backing up an inspired performance in Dunedin proved a bridge too far, especially with referee Damon Murphy policing the breakdown much more strictly. Fiji’s poor discipline — they conceded 14 penalties — proved their downfall throughout. With Tonga and Fiji as opponents, July was always going to be an appetiser to the Bledisloe Cup and Rugby Championship for the All Blacks. As is often the case at this time of year the All Blacks did not immediately click — in part due to the mass changes Foster made each week with a view to building depth and experimenting to find his first-choice side. On this evidence many of those who featured prominently on Saturday will retain their places for the opening Bledisloe on August 7. It was another erratic start from the All Blacks with Fiji opening them up through the midfield and controlling the opening exchanges. The All Blacks’ lineout malfunctioned at times and McKenzie kicked out on the full to allow Fiji to set the early tone. Once the All Blacks settled, though, their attack flowed nicely with Mo’unga pulling the strings. Havili continued his impressive return to the test arena by hitting a flat Mo’unga pass, jinking through the line and sending Reece over for his first try with an inside flick ball. Fiji couldn’t replicate their stifling, frustrating efforts with referee Murphy frequently pinging the visitors for going off their feet which reduced the game to a stop-start spectacle. Mo’unga laid on Reece’s second with a perfectly-executed short side play. Aaron Smith sniped blind from the scrum to set Mo’unga away and he held up the pass brilliantly to send Reece in. Murphy eventually lost patience to send Fiji captain Leone Nakarawa to the bin for repeat team infringements — just after Reece collected his third from a wobbly Mo’unga skip ball — to further compound challenges containing the All Blacks. Savea crashed over following two strong, direct carries from Akira Ioane and George Bower to establish a 29-6 halftime lead and send Fiji a clear message that there would be no let up. That proved the case with the All Blacks continuing to pile on the points in the second spell with their bench adding impact and Fiji making few inroads. As an exercise, the All Blacks will take more lessons from the first match, when they were seriously challenged, than in this more comfortable victory. But, for now at least, they can move into the next phase of the season with confidence, having amended several areas of concern. All Blacks 60 (Sevu Reece 3, Samisoni Taukei’aho 2, Ardie Savea, Will Jordan, Rieko Ioane, Shannon Frizell tries; Richie Mo’unga 5 cons, pen, Beauden Barrett con) Fiji 13 (Peni Ravai try; Ben Volavola con, 2 pens). HT: 29-6 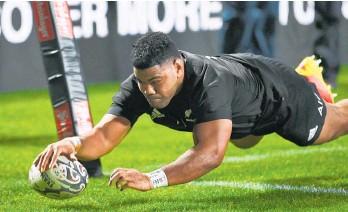