A tonne of (Lego) bricks

Ryan “The Brickman” McNaught has brought Brickman Awesome to Hamilton for the school holidays. Ever wondered if an orca could make it as far up the Waikato as Hamilton? Answer, yes! A phenomenon is happening as a 3m-tall orca lands on the city as part of the spectacular Brickman Awesome exhibition, run by Ryan, until the end of the month. After completing a stunningly successful season at Auckland Museum that drew more than 100,000 attendees, this world-class exhibition produced by Legocertified professional Ryan McNaught is running at Claudelands Event Centre until August 1. A centrepiece attraction is the orca model, which has been built with more than 14,200 Lego and Duplo bricks. The giant orca is just one of 37 aweinspiring creations constructed during 5000 hours using just under a million Lego bricks. Another of the most “awesome” models in the exhibition is the world’s first life-size Lego Harley-Davidson, which will be showcased alongside a number of record-breaking models, including the largest Lego brick Caterpillar 797 dump truck! It’s been a busy time for Ryan, who recently starred on the hit TV3 show Lego Masters Australia. The show pits eight pairs of Lego fanatics against one another in a series of building challenges. 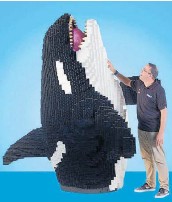