Two young local dancers have qualified to represent New Zealand at the Hip Hop Unite World Championships this year after winning the duo section for their age group at the Hip Hop Unite New Zealand competition in Wellington last month. Twelve-year-olds Ashlee Bell and Regan Gallien said they were determined to get the top spot. “We would get together throughout the week and practise the dance over and over, getting people to watch and tell us where we could improve.” Their routine was choreographed by Imperious Dance Company owner Leeza Vincent, and it was to a range of songs. Leeza says she was stoked for the girls. “The girls totally deserved it, they worked so hard not only on this dance but in all dance classes that they attend throughout the week with Imperious Dance Company,” says Leeza. At the Hip Hop Unite New Zealand competition they competed against 15 other duo teams from throughout New Zealand. They were the only ones within their section to automatically qualify to represent New Zealand at the Hip Hop Unite World Championships, which is most likely taking place online this year due to travel restrictions. Usually it is held in Leiden in the Netherlands. Ashlee also competed for crews Spoken and Rezilient and Regan danced with Spoken. They both also competed within the company’s MegaCrew at the dance competition. To prepare for the international dance competition, the girls are rewatching their footage of the routine to identify any mistakes they can fix. The two girls are also focusing on trying to be more in sync with each other. “It’s important to dance as a connected pair and not look like you’re dancing as two individuals on the stage.” 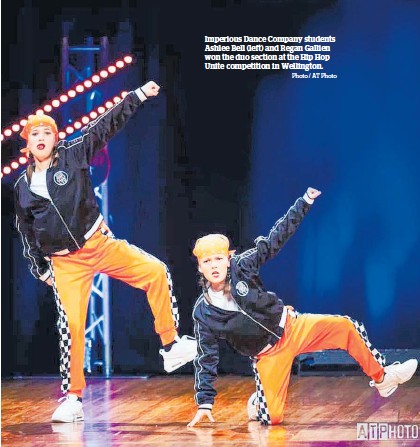