What a racket: Club celebrates

Stories were bandied about and scores were settled when more than 100 members of the Hawke’s Bay Squash Rackets Club (HBSRC) turned up to celebrate the 50th anniversary of its 1971 move to the Niven St premises recently. A function was held at the club on the Friday, followed the next day by ex club members reliving and settling old scores from the time when they were active players on the courts, says club patron John Healey. “Many stories were retold of how good they were in their younger years and of the fun they had at the club. Many of the older members even recalled their time at the old Cameron Road club with stories about the mischief they got up to in the old lounge affectionately named The Grotto.” The first club in Cameron Rd was constructed by club members in an old water reservoir owned by the Napier City Council. The two courts plus ablutions and a lounge area were built at a cost of $5200. The club was first established in 1955 and was the sixth squash club in the country, with the first game played just prior to hosting the North Island Championships in 1956. “Squash as a sport was in its infancy then and really started in earnest duringWWIIas away of getting fighter pilots hyped up for battle while waiting to be scrambled into the air,” John says. The reservoir site outlived its size with membership growing very rapidly as squash became a mainstream sport. “Its location within a residential area resulted in many complaints from neighbours about late night play and the social events making their associated noise.” More than 50 years later, the noise level remained high as the oldies at the reunion talked loudly and excitedly with old mates they had not seen for a long time, John says. “Many expressed their desire to renew their old friendships with emails and cell phone numbers shared. Lots were looking forward to the 75th year celebrations of the founding of the club planned for 2030 as an incentive to hang on in.” Although there were no founding members of the Cameron Road club at the celebrations, there were a few “old codgers” who played both at Cameron Road and at the Niven St courts when the latter clubrooms first opened. Garth Lawrence and Joy McMullen were the club champions in 1971 — Garth assisted current president Bex McIntosh and 1976 club champion Anne Pratt cut the ceremonial cake. Over the years the club has successfully hosted many New Zealand Open, Masters and Junior championships events. John says the club has members who have won NZ Masters and Juniors titles, have represented New Zealand as juniors as well as Alan Watton, who was president of Squash NZ. The club has been successful locally over a long period and is the current holder of the Lion Brown Pot played annually to determine the Eastern Regions’ top club. Like all mainstream sports, squash clubs do not have the membership they once had at their peak in the mid-1980s. John says the club champs used to be one of the year’s major events with players battling to get their name on the club’s honours board. “Our tournaments were always well sought after, with entries often exceeding available playing times and with play well into the early hours of the next day.” He says balloting out was necessary to get numbers and times down to a manageable level. “The ballot was not very scientific with people balloted out for obscure reasons such as not spending enough money at the bar, arguing with the ref, not turning up on time for games or for just being a prat at other tournaments.” The club has held its membership numbers steady over the last 10 years, being a third of the numbers in its heyday. “The club is in incredibly good heart with strong junior numbers receiving excellent coaching.” John says the club’s five courts are not used as extensively as in previous years, but are still utilised for hosting national competitions and teams events. “Squash clubs throughout the country are faced with too many courts and insufficient members for the size of their premises. The HBSRC has looked at amalgamations with other squash clubs, joining in with different sports to enable greater use of its excellent facilities.” Moving to other locations within a multi-sport complex has also been considered. “Squash is an attractive game for young and old who like an activity that can be played any time of the day, in any weather if there is one other person with a similar interest.” The HBSRC has a manager who can arrange a game for prospective players. “All that is required is a moderate level of fitness and suitable footwear with rackets and ball provided.” 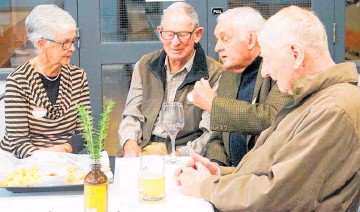