Wait nearly over for concert

Ali Harper is returning to Palmerston North and this time will showcase the hit songs of six-time Grammy Award winner Burt Bacharach. The Look of Love features Bacharach’s extensive collection — Close To You, Alfie, That’s What Friends Are For, Walk On By, Anyone Who Had A Heart, and What The World Needs Now. The Look of Love captures the intimate Manhattan cabaret club vibe, something Harper adores from her time performing in New York. It celebrates a long line of Bacharach muses, from Marlene Dietrich to Dusty Springfield, Dionne Warwick to Aretha Franklin and Cilla Black. “Music is so powerful for evoking feelings of nostalgia,” Harper says. “When I teased the idea of a Burt Bacharach show, I could see people’s eyes light up and it became clear that providing a show in such restless times is essential in taking audiences to that happy, sweet place of yesteryear.” Harper and her musical arranger Tom Rainey were in awe all over again when rediscovering Bacharach’s music. “Burt’s melodies are utterly gorgeous, timeless and abundantly beautiful whether they are about heartache or hope,” she says. Harper is grateful that throughout the past tumultuous year, she has been able to take the show to audiences in Christchurch, Nelson and Wellington with a four- week season at Circa Theatre earlier this year. “Bacharach’s songs seem to resonate even more now with all that we have been through. “What The World Needs Now is like it has been written especially for these challenging times.” Christchurch-based Harper is a graduate of Toi Whakaari: The New Zealand Drama School and her career has spanned 30 years. Her one-woman show Songs for Nobodies was awarded Best One Woman Show at New York’s United Solo Festival on 42nd Street in 2018. Harper performed Songs for Nobodies at Centrepoint Theatre in 2017. She was resident singer for four years on TV One’s Dancing with the Stars. Rainey will be on piano for The Look of Love. As an instrumentalist, arranger, composer, producer and conductor, Rainey maintains an active profile in the New Zealand performing arts scene. In 2020, he was given the New Zealand Order of Merit for services to music and music education. Harry Harrison will be on guitar. 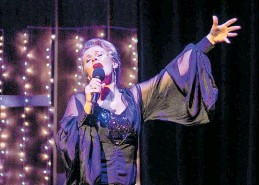