Last week, deputy mayor Holborow and councillors Halliday and Prvanov and I were caught up in the civil emergency declared by the Marlborough District Council. We were in Blenheim for the AGM and conference of Local Government NZ. With all flights and ferries potentially cancelled, we were stranded with the possibility of losing the short-term accommodation we had. Then an act of random kindness. Brent, owner operator of Blenheim Shuttle, offered two bedrooms at his house to shelter us. As it turned out, we did not need it, but it reflected the generous spirit of the local communities impacted by the floods. In the midst of the mayhem I still kept tracking news of Toa the baby orca. A story that tugs at our heartstrings. It’s wonderful to see the huge community of volunteers helping this baby get back to its family. For me, it symbolises our responsibility to heal our environment. Like everyone, I’m praying this reunion will happen. We need stories of hope and the inspiration of trying to do good things. Especially during these globally challenging times. A highlight at the conference for me was meeting the National Party spokesman for local government. It was an unusually warm meeting given the stoush we had back in March 2018. Many remember the huge promotion of the Air New Zealand flights to Auckland from Ka¯ piti Coast Airport supported by the KCDC, the chamber of commerce and Air New Zealand. The latter even served 3000 hot dogs. Public turnout was enormous. Then, just a week later, I was given a 24-hour notice that Air New Zealand was pulling out of the service. I remember giving Air New Zealand a public bollocking and challenging the CEO of Air New Zealand to call me to explain this abysmal treatment of a provincial district by a nationally owned organisation. The public uproar that followed sparked off Regional Economic Development Minister Shane Jones who in turn gave both the chair of the Air New Zealand board and its CEO a public dressing down. A reaction by the CEO saw Minister Jones warn him to butt out: “Do not poke your nose into the political ring unless you are going to resign today and join the National Party.” Minister Jones’ words were prophetic back in 2018. And here we were in 2021 Blenheim last Friday at the LGNZ conference. The former CEO of Air NZ, Christopher Luxon, was now National Party spokesman for local government. Despite the stoush back in 2018, the meeting was a warm one. Helped by the fact that, following my 2018 public challenge, Mr Luxon did immediately call me and, in the months that followed, offer an exit package that did help a little towards easing in the arrival of Air Chathams. I’m also aware that as the local government sector journeys through major reforms like Three Waters, the RMA and, really, the very future of the democratic relevance of local government, we cannot be ideologically blinkered to any single political party. On the Three Waters reform the current government is absolutely right that, given the historical lack of investment by finance-strapped councils and the consequential failing infrastructure, local government could not continue with business as usual. Speaking to the conference, Luxon acknowledged there is a case for change, but added his party had “serious reservations around the Government’s proposals”. Its starting point is that the proposed amalgamation of water services should not be forced on councils. That echoes the constant position of LGNZ. National’s concerns, he said, were with the Government’s model for change. He outlined some of these concerns. It would be useful to discuss these another time. Councils have eight weeks to discuss the offer of an additional $2.5 billion towards transitioning the Three Waters reforms into the outcomes the Government is seeking. We will then consult the public. I end with this observation. As an avid fan of Country Calendar I’m acutely aware of the consummate skill of sheep farmers who know the psychology of their flock. Using a combination of feed, dogs and fenced runs to manoeuvre the sheep where they willingly go into the required pens. Reformist governments need to have such skills. 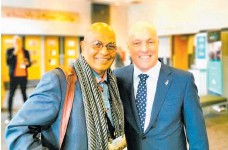