FAMILY MUSTANG overtakes the sporty one

As soon as Ford first pulled the covers off the allelectric Mustang Mach-E SUV, the world knew that it would only be a matter of time before it managed to outsell the iconic blue-badged sports car. That day has now come. As confirmed by American publication Automotive News, sales figures from June show that a total of 2465 Mustang Mach-E models were sold, compared with just 2240 petrol-powered coupes and convertibles. Ford sales of electrified vehicles overall expanded 117 per cent in June. That's a new all-time sales record driven by new products. The F-150 PowerBoost hybrid accounted for 17,039. Escape hybrid and plug-in hybrid electric vehicle (PHEV) sales totalled 15,642. The Mustang we've all known and loved for decades has still sold more overall units than the MachE in America year-to-date (31,950 to 12,975), but that could change before the year is up. Looking at Ford's production figures, it's clear where the priorities lie: 26,089 petrol Mustangs manufactured so far for 2021 compared with 27,816 Mach-Es. In fact, the Mustang Mach-E is up there on America's list of fastest-selling vehicles. Throughout April, a Mach-E has only spent four days on average in a dealership before being sold. Despite the predicted rise in popularity of the electric SUV, fans of the standard Mustang shouldn't worry; Ford has strongly indicated that there will be another generation of Mustang sports car after this one. Whether the beloved 5.0-litre V8 will continue is not yet known. 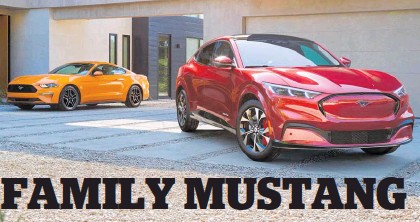