Anti-nuclear protests, secret meetings, security on high alert — early 1985 provided a rich context for David McGill’s latest mystery novel. The Convict Stain focuses on an intense part of New Zealand and Australian history, remodelled with the Paekakariki wordsmith’s magic, as well as another saga for the Delaney family. McGill said the story is centred in Sydney in 1985, where the Delaney family is launching its wine label on the steps of the Opera House. At the same time the nuclearpowered USS Buchanan is anchored in Sydney Harbour. “This was when David Lange has gone walkabout on the eve of New Zealand voting on whether there would be nuclear-free waters. “It caused a tremendous fuss because he was out of touch with the Australians and Americans, and the Anzus Treaty, but also his own Cabinet. “He chickened out, I think. “My story features one of the Delaney girls, who is a detective in the diplomatic protection squad, charged with minding Lange in the Sydney Hilton where all the action takes place. “Various foreign powers try to stop Lange’s destruction of Anzus because, when he created a nuclear-free New Zealand, the Americans refused to have anything to do with him because he was banning their ships and stuffing up the alliance. “It was a very turbulent time when New Zealand was suddenly on its own. “This is about the crux moment — none of it is true —at the Sydney Hilton, where he secretly meets with Bob Hawke. “And Bob Hawke was like his name, very hawkish, he was proAmerican and pro-nuclear weapons, but Lange was ambivalent, and hadn’t by this stage become famous for his anti-nuclear stance. “So it’s a very interesting conversation in my view, because I made it up, in the Sydney Hilton. “And three foreign powers attempt to kidnap Lange and hold him for a kind of intellectual ransom. “They want Cabinet not to vote to go nuclear-free. “Meanwhile, the Delaney family have quite a shock when they get to Sydney when they encounter a woman, who used to be a man, who’s a family relation.” McGill said the ‘convict stain’ was a phrase in Australia for people with the convict heritage in them. “It’s now considered admirable but in 1985 it was still shameful. “So there’s a lot of family history that emerges in the course of this story, but the story stays on track, and is essentially about Maria Delaney trying to protect Lange and involving her father, mother and sister, for various reasons.” He said the timeframe was when the “biggest public demonstration in Australia took place”. The anti-nuclear stance saw about “350,000 people walk down the streets of Sydney”. “It was a very turbulent time in Sydney, as well as New Zealand. “A lot of people in Sydney, and across Australia, also objected to American nuclear warships. “In fact the month after my book was set, in March 1985, a local ecowarrior, they didn’t use the phrase then, who was a pilot, dive-bombed the American warship that was supposed to be coming to New Zealand. “He dive-bombed it with yellow dye.” McGill said the book was the second-to-last in the Dan Delaney series. “The seventh will be back in Derry where the family comes from.” McGill has dedicated The Convict Stain to his late cousin Patricia Ryder and the late Kiwi drag queen Carmen who he knew well when working in Sydney years ago. To order a book go to www. davidmcgill.co.nz. 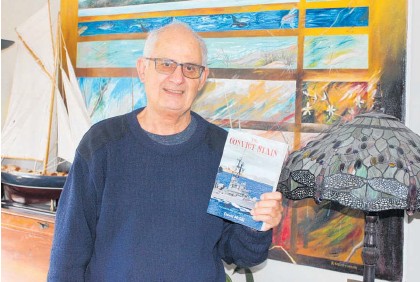