A64 townhouse development proposed for central Paraparaumu has been snapped up by eager buyers. “It did sell out quite quickly,” said Stephen Sutorius, the owner of Thames Pacific, which is creating the development. “We did a small pre launch for a couple of days before we did the official launch when the balance of the units were sold. “The demand for Ka¯piti and also housing at an affordable price point was obviously very important. “A lot of the buyers were Wellington based that were looking to relocate to the area. “Once Transmission Gully opens the commute time will be 30 minutes coming from town and it will be comparable to driving to Eastborne or Lower Hutt.” The subdivision, called Florian Ka¯piti, would be located at the end of Ihakara St, opposite the Police Digital Services Centre. Resource consent was going well, Sutorius said. “Ka¯piti Coast District Council has been very good to work with and very supportive of the scheme. “They are having a push to look at more medium density housing in the area because there is such a need for housing.” All going well, site works were expected to get under way towards the end of the year before “roughly a 16 month build”. The subdivision would comprise a mixture of two and three bedroom townhouses with all of them freehold. “So no body corporate, however we will have a resident society in place to manage the day to day running of the development. “An owners’ corporation is probably the best way to describe it. “There’s a set of rules in place about what you can and can’t do.” Prices started in the high $700,000 bracket. Sutorius said the proposed development stemmed from discussions with Ngahina Developments and Coastlands about getting some new medium density housing in the town centre area. He said the site was “fantastic” and offered residential closeness to shops, public transport, reserve areas with plenty of walkways, as well as a shortened journey time to Wellington once Transmission Gully opened soon. “Most of the development is overlooking a reserve which means you’re not looking into someone else’s backyard. “And a lot of work has already been put into creating natural wetlands in the area. “The area has definitely had some good money spent on the infrastructure and just needs the people to go with it now.” Thames Pacific has other projects on the go including The Paddington, which is 151 terrace houses in Taranaki St, Wellington, The Quarter which is 75 industrial units in Seaview, and another project coming up in the city comprising 150 apartments. “We position ourselves as a large scale residential developer,” Sutorius said. The Ka¯piti Elliott. architect’s behind Florian is Designgroup Stapleton 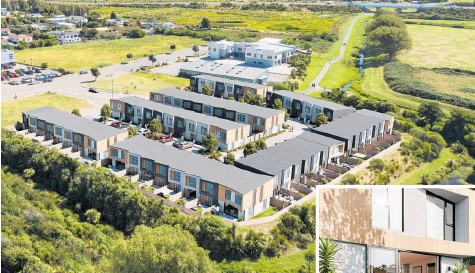