Agroup of O¯ taki College students have played football for 40 hours as part of a fundraising effort for a family in need. The group comprised a boys leadership group, called Manukura GPS, whose guiding principles involve helping others and serving the community. Over the weekend, in the college gym, from 6am on Saturday to 10pm on Sunday, the football marathon took place. The Manukura GPS boys, featuring just over 20 boys, split into two teams, so they had five-a-side games going across the 40 hours. Other groups from the community played against them at certain times, which helped spread the physical demands. The aim of the football challenge was about supporting a local family in their time of need. Liam Paroli, 9, who goes to Waitohu School, has soft tissue cancer and needs to undergo 66 weeks of chemotherapy and radiotherapy, most of which needs to be done in Auckland’s Starship Hospital with the rest in Palmerston North Hospital. He’s about three months into treatment. Liam’s mother Andy has had to leave work to be with her son, and that has meant the family has lost half its household income and are in need of as much support as possible. The money raised by Manukura GPS as well as a Givealittle page will be used to help the family including travel from O¯ taki to Auckland for Liam’s regular treatment. Liam, a keen football player who plays for an O¯ taki junior side, played for a bit on Saturday morning. A special moment was when the Manukura boys did a haka to him and then gave him a miniature Fifa World Cup. Liam’s mother, Andy, was humbled by the support. “It’s completely amazing and so overwhelming that people, who don’t know us have done something, that Liam loves doing, to help us. “It’s unbelievable.” She said Liam was diagnosed with rhabdomyosarcoma, which affects muscle tissue, in April. “It came out of a routine GP appointment. “The GP was checking ear, nose and throat and found a growth coming out of an ear. “They investigated and we were told it was benign at first, and then Starship came and found it wasn’t.” It was a challenging time but “it makes it easier knowing the community is behind us”. Manukura GPS mentor and physical education and outdoor education teacher Sam Ward said everyone was happy to complete the challenge. “It was awesome.” There was a strong commitment to the challenge. “With the wha¯nau there, and everyone pitching in and giving their support, it made us get there regardless of how tired we were. “It was a bit overwhelming and incredible for so many reasons. “For what we did for the Paroli family through to the boys themselves by showing if they want to set their minds to something they can achieve it as well as exceed their expectations. “Just really empowering.” Meanwhile, it wasn’t the first time Manukura GPS has undertaken a long physical challenge to help others. Last year the group attempted a Guinness World Record by playing the longest game of four square. The aim was to beat the world record of 29 hours held by a school group from Buenos Aires International Christian Academy, Argentina, in December 2008. Manukura GPS did it in 30 hours but it needs to be accredited once the college figures out how to upload the filming record of it onto the Guinness World Records website. “We’ve got the footage but it’s about 2 terabytes worth of data and they don’t allow you to send hard copies of things to them, you have to upload it onto their website, but their website doesn’t take anything that massive, so we’re still struggling to figure out how to chop it all properly to get it to them. But we did it [the longest game of four square].” Their four square efforts raised $15,000 for the Mental Health Foundation. The Givealittle page for Liam closes on October 18. 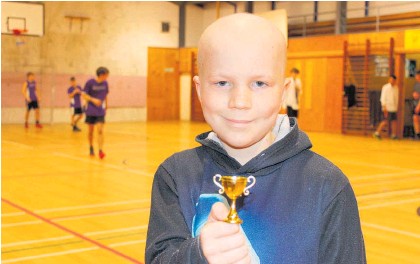