Earwigs, witches and sake will all be part of the colourful month of August when the Japan Society of Hawke’s Bay celebrates its 60th birthday next month. The society was formed by New Zealanders and Japanese nationals living in Hawke’s Bay in 1961 and was incorporated in August that year. “The society was initiated by Paul Knight who was a teacher at Napier Boys’ High School at the time. He had struck up friendships with the Japanese seamen aboard log-freighters that arrived at Napier Port and began learning Japanese with them in 1960,” says president of the Japan Society of Hawke’s Bay Elizabeth-Marie Nes. “When Paul realised there were a number of local people interested in meeting with Japanese visitors, he set up a gathering and later formed the society.” Elizabeth-Marie says there has always been a steady membership over the years, made up of both Japanese and New Zealanders, but they are always looking for new members. “Our goals are to promote activities and provide services to our members and to strengthen the bonds of friendship between Japan and Hawke’s Bay. “We are proud to support Napier City Council with their sister city relationship with Tomakomai. “This sister city relationship recently celebrated its 40th anniversary in April.” The society is managed by a committee of dedicated volunteers — Elizabeth-Marie Nes, Djany Tanabe, Jacqueline Yoshioka Braid, Iain Redrup and Kinuko Iko — who help promote the Japan Society of Hawke’s Bay across the region, Elizabeth-Marie says. “The society has members who share a common interest of studying Japanese culture, language and a love for Japan.” The society will be coming together for both private and public events in August to celebrate the occasion. Elizabeth-Marie says the community is welcome to attend two public events — the Zenkuro (NZ) Sake and Japanese Gin night and the Earwig and the Witch fundraiser movie. “This is an important milestone as it will celebrate the success of the society within the Hawke’s Bay community and our friendship with our Japanese community in New Zealand and in Japan.” Elizabeth-Marie says they are hoping to see the founding initiator, Paul Knight, and founding committee members Taeko Yoshioka Braid and Jacqueline Holt. Event information and to purchase tickets can be found on the group’s websitewww. japansociety.co.nz under 60th events 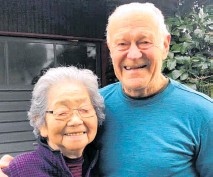