More than 1000 farmers brought tractors, utes, barking dogs, a helicopter, and a few controversial signs to one of the biggest protests Hawke’s Bay has witnessed in recent times. There were about 800 at Showgrounds Hawke’s Bay Tomoana, and about 300 parading along the streets of Dannevirke for a “howl of a protest” on Friday afternoon. Traffic built to a standstill on State Highway 51 in the lead-up, the policed convoy starting on Railway Rd, past the hospital, doing a U-turn at the expressway, and then going back to the Showgrounds. A reporter’s count of those arriving at the Showgrounds about 2pm suggested there were about 800 vehicles in the convoy. The protest was organised by Groundswell NZ, a rural movement that has ignited in recent weeks, the spark caused by a proposed levy on utes to help the country in its path towards carbon neutrality. Chris Miles, who co-ordinated the Hastings protest, said farmers and growers were fed up with constant government interference in the rural sector. He said many regulations forced upon them in recent years were impractical and prohibitively expensive, creating immense mental strain. “We’re constantly being told what we can and can’t do. Everyone I know has had a gutsful, and we can’t stay silent any more,” Miles said. He said the number of growers and farmers who turned up nationwide was “unprecedented” and he felt it was probably the “biggest protest ever seen in New Zealand”. He said if the Government did not make changes that satisfied farmers by August 15 they would be taking “further action”. Signs including “Black Utes Matter” and “Bureaucracy is the art of making the possible impossible” could be seen on the backs of vehicles. Hawkes Bay Diggers’ digger operator Ryan Bassett, who was driving his ute in the protest, said the Government was “out of control with their taxes”. He said the decision to give $2.75m to a Mongrel Mob-led meth rehab programme in Central Hawke’s Bay was frustrating given the Government “don’t spend any money on our industry”. “Hopefully today will turn Jacinda’s head. We need to do this to actually make something happen.” Miles said there was a misconception the protest was just about the government tariff on high-emission vehicles when Groundswell had several issues. An issue not often considered or mentioned was animal welfare, said Ike Baker, a young Raukawa farmer. “I am here for the animals. The welfare of animals isn’t even considered when farmers have to compromise on feeds.” Kit Torr came from northern Hawke’s Bay to support the farmers. He said he was happy there weren’t many politicians around. “This isn’t about them. It’s a good thing they are not here.” He said he wanted recognition for what the rural community does for the country. Former Hastings deputy mayor Cynthia Bowers said it took a lot for farmers to get upset and the Government needed to listen. “A lot of them have given up a day of work to drive their tractors and utes all the way into town and giving up a day of work is hard.” Representing the tradies, Tessa Paaymans, along with her mother Mercia, said Ardern did not understand the laws impacted “everyday people”. “We are a car family, we need utes for our business. Does this mean with the tax on utes that our business should go under because the Government doesn’t like utes?” 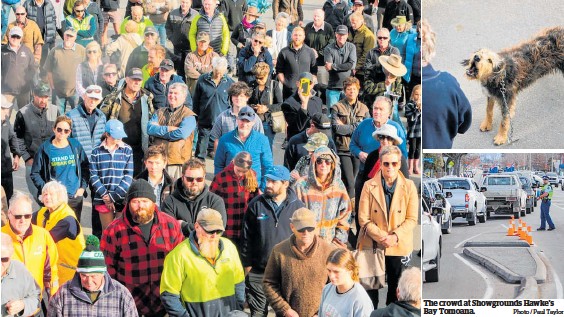